This post contains a bedtime story to introduce young children to modern money. It was written by Janice Reavell and Elf Number 35 (Malcom Reavell) in Scotland, and me, Jeff Epstein, in the United States. This version of the story is tailored for the US. A version specific to the United Kingdom and Scotland is forthcoming. The chain of events that inspired this story is documented at the bottom of this post.

Note that someone gave me a great suggestion to improve this story. It’s a big change so will take a bit, but FYI, a change is coming…

Top image: Malcom Reavell reading to his grandson, two-year-old Davie Birt. From this tweet. (A full screenshot of the tweet can be found at the bottom of this post.)

Elf Number One and the Keyboard

Once upon a time there was a very happy land ruled by a great and loving King. In this happy land, everyone had a nice home to live in and plenty of healthy food to eat. All the children could go to school and college to learn, and there was a publicly-funded health service for everyone to use. The health service would look after them when they were hurt, sick, or feeling down.

Every day, Elf Number One sat down at his special Keyboard and typed just enough numbers to make sure that everyone had the money they needed to buy and sell things. No one was poor, no one was hungry, and no one was homeless.

It was a happy time.

The next morning, Bad Fairy Thatcher banished Elf Number One from the land. She told the people that in order to prevent terrible suffering, the special Keyboard would have to be hidden away forever. She said form now on, if the people wanted houses, roads, schools, and hospitals, then the people would have to pay for it themselves.

Worst of all, when the people went to sleep each night, Bad Fairy Thatcher held a secret party at The Big Bank. She invited all her evil minion friends from the top-end of town and let them use the very special Keyboard to type as many numbers as they wanted. They kept all the money to themselves and got richer and richer while everyone else got poorer and poorer.

Then one fateful day, Bad Fairy Thatcher told everyone that there was no money left at all in The Big Bank!! She said that in order to make The Big Bank some money, she would have to sell all the nice things the people had needed. She sold the schools, the railways, she sold the houses, the gas and electricity. She even sold some hospitals and other pieces from the public health system. Bad Fairy Thatcher said this made her very upset but what could she do? “There is no alternative!”, she said. That very night, however, in her secret party at The Big Bank, Bad Fairy Thatcher and her evil minions laughed and laughed while typing themselves up some more numbers and more money.

They were very, very sad. What had gone wrong? All the nice things they were once provided, they now had to pay for out of their own pockets. And when they ran out, they had to borrow some from the evil minions on the top end of town.

Then one day, many years later, a little girl named Stephanie was walking to school. She noticed that there were many homeless people, but also many empty houses. She saw that many were hungry, but there was plenty of food in the shops. She saw there were holes in the road, but plenty of stone and tools, and people who knew how to use the tools and also needed a job.

When she arrived at school she asked her teacher about this. Her teacher replied: “There’s not enough money to pay for it.”

Her teacher said, “But we have to find the money to pay for these things. There’s only so much to go around! If people are poor, I guess it’s because they don’t work hard enough.”

Stephanie thought about this. She knew plenty of people who worked very hard, but they didn’t have as much money as Bad Fairy Thatcher and her evil minion friends on the top end of town. Stephanie knew something was very wrong but she couldn’t quite put her finger on it.

“Can’t we just make more money?,” she asked. “Where does it come from?”

“I don’t remember,” said her teacher.

Stephanie decided to find out. Word spread across the land about Stephanie, and soon she received a mysterious message. It told her of a faraway place called The Post of Keynes. The Post of Keynes had many wise people, and it was said they knew the answers that Stephanie was seeking. She traveled there to talk to them.

The wise people from The Post of Keynes told Stephanie all about the great and loving King. They told her all about The Big Bank and its special computer and special Keyboard. And they told her about the King‘s wisest and most trusted advisor, Elf Number One. Then they told her about the terrible spell Bad Fairy Thatcher cast across the land and how it made the people forget how good it could be. Finally, they told Stephanie about how Bad Fairy Thatcher secretly used the Keyboard every night with her evil minions but every morning told the people how the Keyboard was hidden away forever.

Stephanie got very, very angry. She decided to learn everything she could, and write it all down in a book. She called the book The Deficit Myth and she made sure to write it in a way that everyone could understand what she learned from the wise people at The Post of Keynes.

Some claimed the book to be magic. But it was not. It was special though, because as soon as someone read final page, they suddenly remembered how it used to be. When they closed the book, Bad Fairy Thatcher’s spell was broken. It no longer worked!

The people now remembered, and they went to wake the King. They gave him a copy of Stephanie‘s book, and told him to read it right away. As soon as he finished the last page, he sent his royal guards to banish Bad Fairy Thatcher and her evil minions forever. The guards then searched for Elf Number One and returned him home, back to his special Keyboard at the special computer at The Big Bank.

Although it took some time, day after day, Elf Number One typed in all the numbers necessary to fix the terrible problems caused by Bad Fairy Thatcher. The King and all his people used the new money to hire lots more carpenters, builders, and others, to mend the roads and repair the roofs of the schools and hospitals. The beggars even began to disappear, because they were given homes to live in.

Things soon returned the way they were. The good and loving King once again ruled over the land. Everyone had a nice home to live in and healthy food to eat. All the children could go to school and college to learn, and there was a publicly-funded health service for everyone to use whenever they needed it.

…and they all lived happily ever after.

One day a little while after Bad Fairy Thatcher and her evil minions were banished from the land, The King visited The Big Bank to see Elf Number One.

Elf Number One was very happy to see the King, and the King was very pleased to see Elf Number One. The King congratulated him on the good work he had done.

“Thank you sire”, said Elf Number One, “Now I would like you to meet Elf Number Two”.

Elf Number Two very shyly stepped forward and curtsied. The King greeted her most warmly and with a big smile of surprise asked: “And what is it you do in The Big Bank, Elf Number Two?”

“We have a computer that destroys money?” he gasped, his eyes wide with disbelief.

“Yes, sire,” said Elf Number Two, “and I think we may have a problem…”

Appendix: How this story came to be 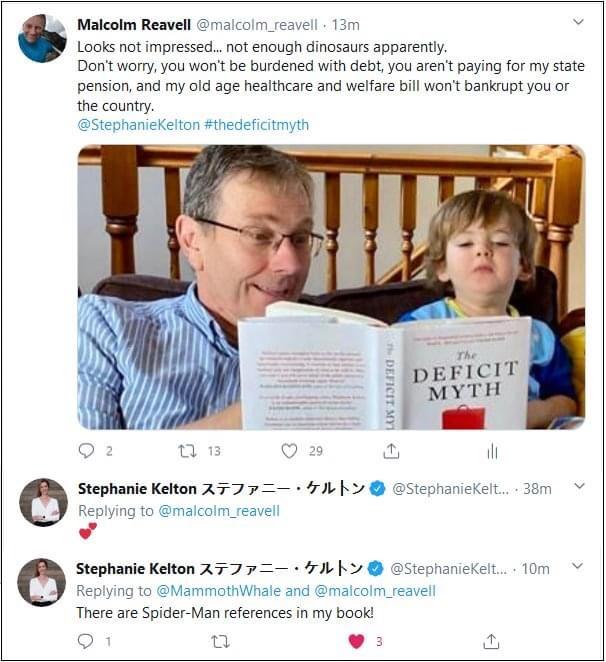 That post was then shared to the Facebook group called Intro to MMT — Modern Monetary Theory (that I am currently an administrator for) by Robin Altman. I saw Robin’s post and was inspired to flesh it out. After a few rounds of back and forth between me in the US and Malcolm and Janice in Scotland, it came to be. (Not unlike the money from the numbers from Elf Number One’s special Keyboard – because we wanted it to.)