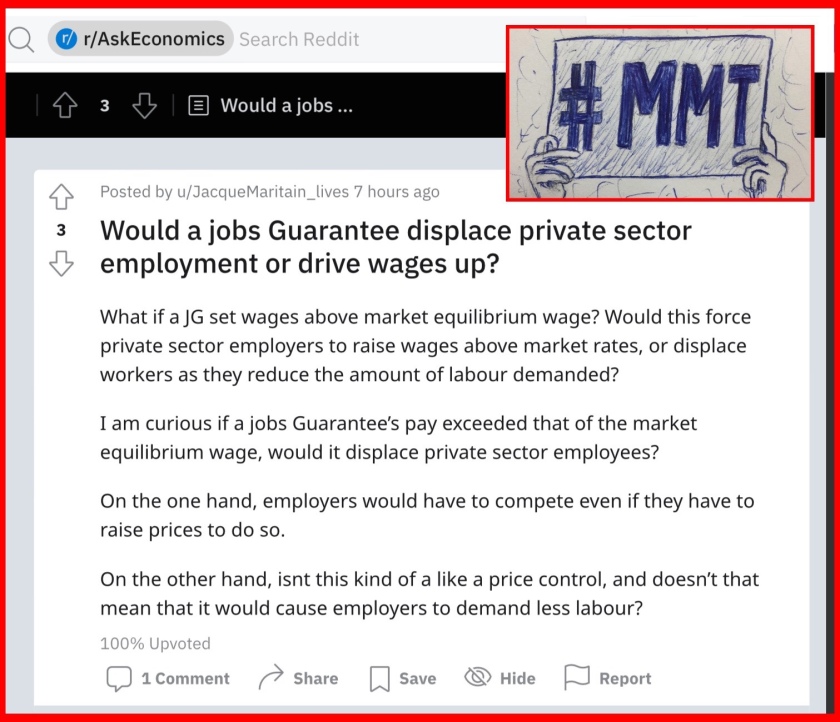 What if a JG set wages above market equilibrium wage?

What if the “equilibrium” wage is below what is possible to survive on?

If a company can only pay wages that result in their workers not being able to survive, then should the survival of that company be so prioritized?

What’s so special about the concept of “equilibrium” that it should be considered as more important than real-world suffering?

Would this force private sector employers to raise wages above market rates, or displace workers as they reduce the amount of labour demanded?

If market rates for wages are below what is necessary to survive on, then should the market be allowed to do that?

What’s so special about the concept of “market rates” that it should be considered more important than real-world suffering?

I am curious if a jobs Guarantee’s pay exceeded that of the market equilibrium wage, would it displace private sector employees?

If the job-guarantee wage were set to “as low as possible, as long as it’s possible to survive on”, then, sure, it would displace workers – from companies that pay their workers so little that it’s not possible to survive! Are you seriously arguing that this kind of displacement is a bad thing? There are only two choices:

For a company to retain their workers, all they have to do is pay a wage that’s marginally better than the minimum (the JG wage). And likely, if other aspects of the job are appealing in other ways, they only need meet it.

On the other hand, isnt this kind of a like a price control,

A minimum wage via a JG is a floor. That floor is the minimum level of what is needed to live with dignity and social inclusiveness. It can be framed as “price control” or it could be framed as “protecting human beings from exploitation”.

There’s nothing wrong with letting the market do its thing, as long as workers – real human beings – are not exploited or abused in the process.

and doesn’t that mean that it would cause employers to demand less labour?

If labor demand were driven by wages, then sure, a JG wage above the equilibrium/market rates would reduce labor demand. In reality, demand for labor is driven by aggregate demand. If workers are paid more, then (after paying off debts) they spend more. Since employees often get discounts from their own employers, they spend even more there. This drives up demand for products, which in turn drives up demand for labor. Since all people now have that higher wage, and not just employees, aggregate demand would pretty clearly increase.

No one should be exploited.

Workers are human beings. A starvation wage causes real-world, mass suffering. On the other hand, the term “equilibrium” is a word we made up with a meaning we made up. You don’t sacrifice human beings in order to defend the concept of equilibrium. You redefine equilibrium!

Equilibrium can be redefined by choosing to do so. With mere thought. The real-world suffering of human beings can’t.

As a final point, the equilibrium wage is defined as, roughly, the wage that both employers and employees agree upon, after a negotiation process. It suggests that both the negotiations and “agreement” are conducted among equals. If, however, those parties are not equals – if one has much more power than the other – then is that negotiation truly a negotiation, and is that agreement truly an agreement?

In other words, is that equilibrium truly equal?