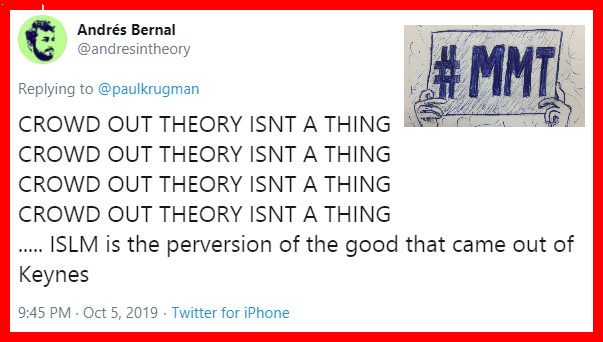 Government spending does not “crowd out” private spending. The reality is that it crowds in or augments private spending. This post describes why this is the case, starting with my layperson take, followed by several academic sources and highlighted by a full walkthrough of the myth and then truth, by Stephanie Kelton.

(This post assumes a fully-financially-sovereign central government. it also refers to financial crowding out, not real crowding out. Regarding the latter, can a sovereign central government use its monopoly power of currency issuance to purchase up a massive amount of real resources, therefore making it such that there are fewer available for the private [non-government] sector to purchase? Yes. That is possible.)

The idea of crowding out falsely assumes that:

The truth is that government spending injects newly-created dollars into the economy (the non-government sector), resulting in new private spending and investment. Below is confirmation by several experts that the myth of crowding out is indeed a myth, highlighted by a full walkthrough of the concept by Stephanie Kelton, which can be found at the bottom.

The loanable funds theory, along with the related ideas of money multiplier and fractional reserves, are all myths. They all became untrue in (I believe) 1935, when the Federal Reserve Act, originally passed in 1913, was amended. Here is Bill Mitchell’s in depth (2009) take on the the money multiplier.

The myth of crowding out: Academic sources

They [endogenous money theorists] argue that central banks set a target interest rate and then inject reserves into the system to maintain this interest rate regardless of what the government is spending or taxing. […] Crowding out, then, can never ever be a problem in an economy where the central bank sets a target rate of interest. Interest rates will always be set by the central bank and private sector actors will get access to funds at this price regardless of how big the government deficit is. […] No longer can we justify policy decisions based on the idea of crowding out or a limited pool of loanable funds. Instead we must take a more nuanced look at inflation, unemployment and other economic variables when making policy choices.

From a 2018 post, An MMT response to Jared Bernstein – Part 2: “…the loanable funds doctrine is fantasy, which is a major flaw in mainstream macroeconomics. ”

From a 2011 post by Bill Mitchell, MMT – an accounting-consistent, operationally-sound theoretical approach: “Budget deficits put downward pressure on interest rates contrary to the myths that appear in macroeconomic textbooks about ‘crowding out’.”

From a 2009 post, The IMF fall into a loanable funds black hole … again:

There is no finite pool of saving that different borrowers compete for and thus drive interest rates up when borrowing demands increase. That view was discredited in the 1930s by Keynes (and others). It is based on the loanable funds doctrine which was the mainstay of the neo-classical marginalists. It assumes saving is a function of interest rates rather than income. It assumes that investment (or other sources of spending that relies on borrowing) is constrained by the available pool of saving.

We understand that none of those assumptions or propositions are even slightly correct.

2013 video by investor Mike Norman: Government spending does not “crowd out” private sector investment. Here’s why…

Crowding out means when the government has to borrow money then that takes funds away from the private sector which could have been used for productive investment. Now this is all completely wrong, of course, as we know, because the government issues its own money the money when it spends it. […]

Think about it [even if the government really did need to borrow from the private sector]. If the government removes funds from the private sector by borrowing, then what happens? It immediately turns around and spends those funds right back into the economy. Think of a swimming pool with a pump. The pump is removing water from the swimming pool and immediately circulating it back into the swimming pool. In effect, what happens, is nothing! The level of the water does not change.

From around the 7 minute, 45 second mark in this episode of the Rhodes Center Podcast with the author of the 2020 book, The Deficit Myth, Stephanie Kelton, hosted by Mark Blyth. Stephanie:

We have this idea that the [central] government has to go out to find money in order to spend. The two primary sources of revenue to the government are taxes, and then if they come up short (if they want to spend more than they collect in taxes), then they must borrow. It’s an imperative. They’re required to borrow to cover the shortfall.

So the borrowing piece tells people [to] think of a stockpile of dollars, that exists somewhere in the world. There are only so many of them. They’ve been placed there by savers. There are people who are willing to not spend all of their income and make their savings available to others to be loaned out. This is called loanable funds. There’s competition for those dollars, and the government is one competitor.

So, the argument goes, the government by running bigger deficits leads to a diminution of the available supply of dollars. The reduced supply the price of dollars goes up, so interest rates rise. The rise in interest rates discourages private borrowers from borrowing and spending on presumably more efficient kinds of investments. This then leads to, in the long run, a slower growing, less-dynamic economy, because the government gobbled up some of those dollars that would have otherwise gone to more productive private use.

So why is that wrong? […] It’s an unfolding sequence of stories:

[…] If a private business wants to borrow, it can walk into a bank and ask for a loan. The bank can do this thing called “create a deposit for the borrower.” It isn’t looking for an available stockpile of dollars. It has the capacity to create bank deposits. So, even if the government is “gobbling up dollars” (which it isn’t), private businesses still have access to credit. Banks can still extend credit to private lenders.

The other point, and I think the more important one: The government’s own deficit spending does not gobble up the supply of dollars in existence. It augments them. So, if the government spends $100 into the economy and only taxes $90 back out, it has placed a deposit of $10 somewhere in the economy. Its deficit results in an addition to, it augments, private wealth. Those dollars are then available to purchase the bonds.